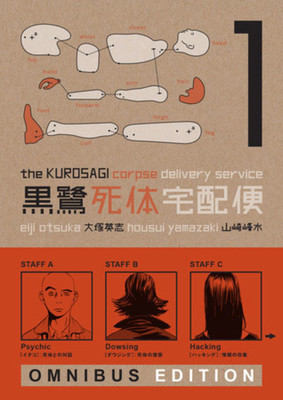 The June issue of Kadokawa‘s Young Ace magazine revealed on Tuesday that Eiji Ohtsuka and Hosui Yamazaki‘s The Kurosagi Corpse Delivery Service manga will get a “reboot” in the magazine’s next issue in June. While the English word “reboot” is used, the announcement also uses the Japanese word “saishidō” (literally, “starting again”), which can also be taken to mean the manga resuming serialization.

The announcement further notes that the “reboot” will have a wider scope, with a global scale.

Dark Horse Comics is releasing the manga in North America, and it describes the series:

Five students at a Buddhist college in Japan realize the job market is tough these days.​.. among the living,​ that is! But their unique spiritual and scientific talents might help them get work from the dead,​ for they can contact the spirits of corpses and speak with them.​ And if a body is found hanging from a tree or lying in an alley,​ it’s probably got a story to tell!

The five form The Kurosagi Corpse Delivery Service,​ specializing in carrying out the last wishes of their dead clients,​ so their souls can move on.​ But the Kurosagi gang are magnets for weirdness – not just corpses – and every case gets them involved in disturbing personal obsessions,​ bizarre modern Tokyo fads,​ and strange rituals of old Japan.​.. and often all at once!

Ohtsuka and Yamazaki launched The Kurosagi Corpse Delivery Service in Kadokawa Shoten‘s Monthly Shōnen Ace in 2002. The two then moved the manga to Young Ace in 2009. Kadokawa published the manga’s 21st volume in Japan in April 2016. Dark Horse Comics published the first 14 volumes of the manga, and then began re-releasing the manga in omnibus volumes in 2015.